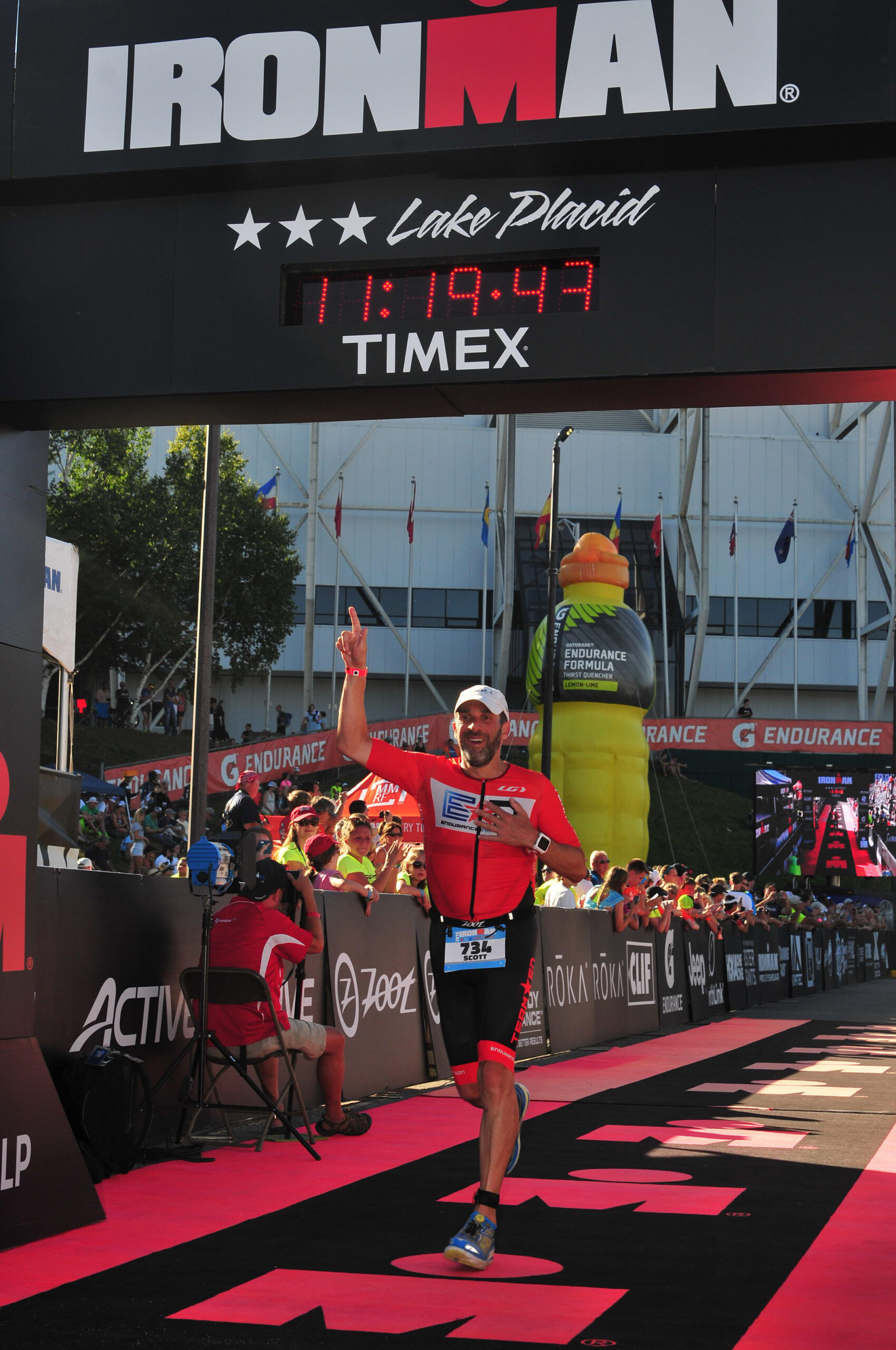 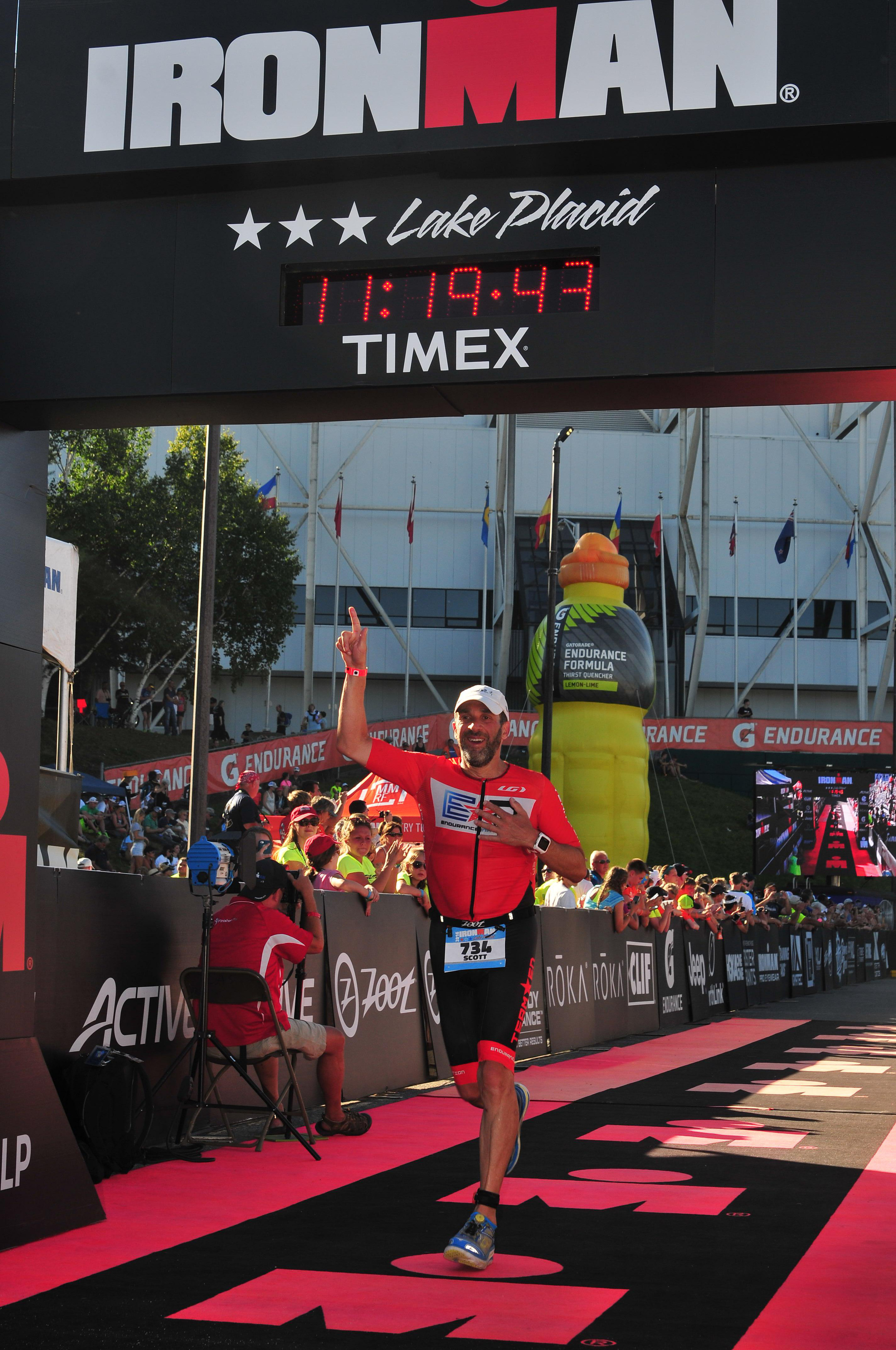 Here is RaceSaver™ athlete Scott Dinhofer at the 2016 Ironman® Lake Placid…crossing the line in a personal best 10th place. In his own words…

Used the race saver bag for Ironman Lake Placid on Sunday. Post race I’ve read a lot of forum chatter on how hot it was. I simply filled the bag up at every other aid station on the run & placed it under my hat. This kept me cool and aided in reaching a PR & top 10 AG finish for the first time for me on a day where many others imploded from the Heat.

Here you can see Scott using the RaceSaver™ in a more traditional fashion. 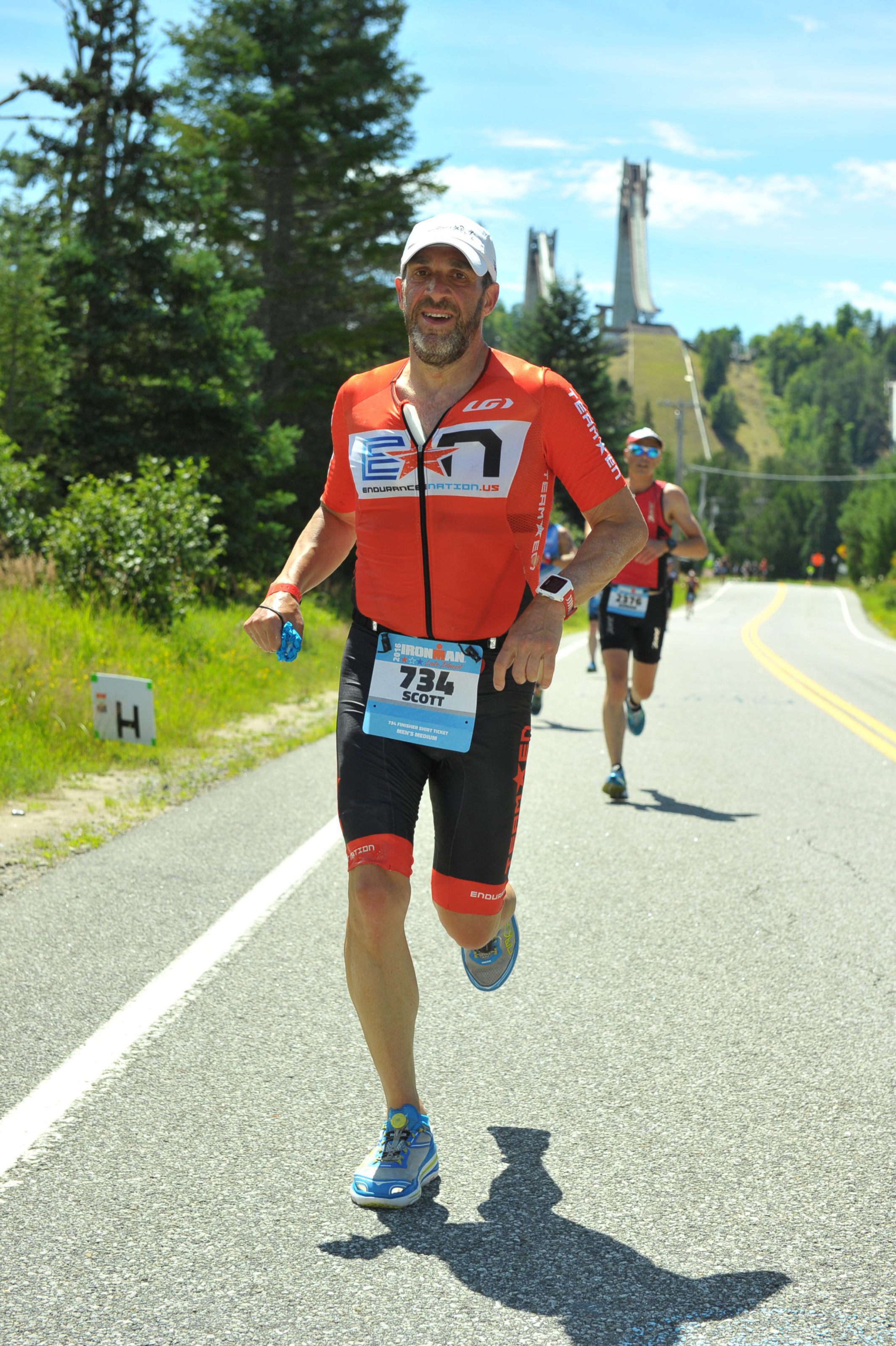 With the black leash around his hand, Scott can keep his hands — and his system — cooler than his competitors.

A quick pitstop at any aid station will allow him to fill it right back up with more ice.

When on the run, he can put the ice where he wants…or even open the RaceSaver™ to put some in his mouth or pool the cool water on his head. 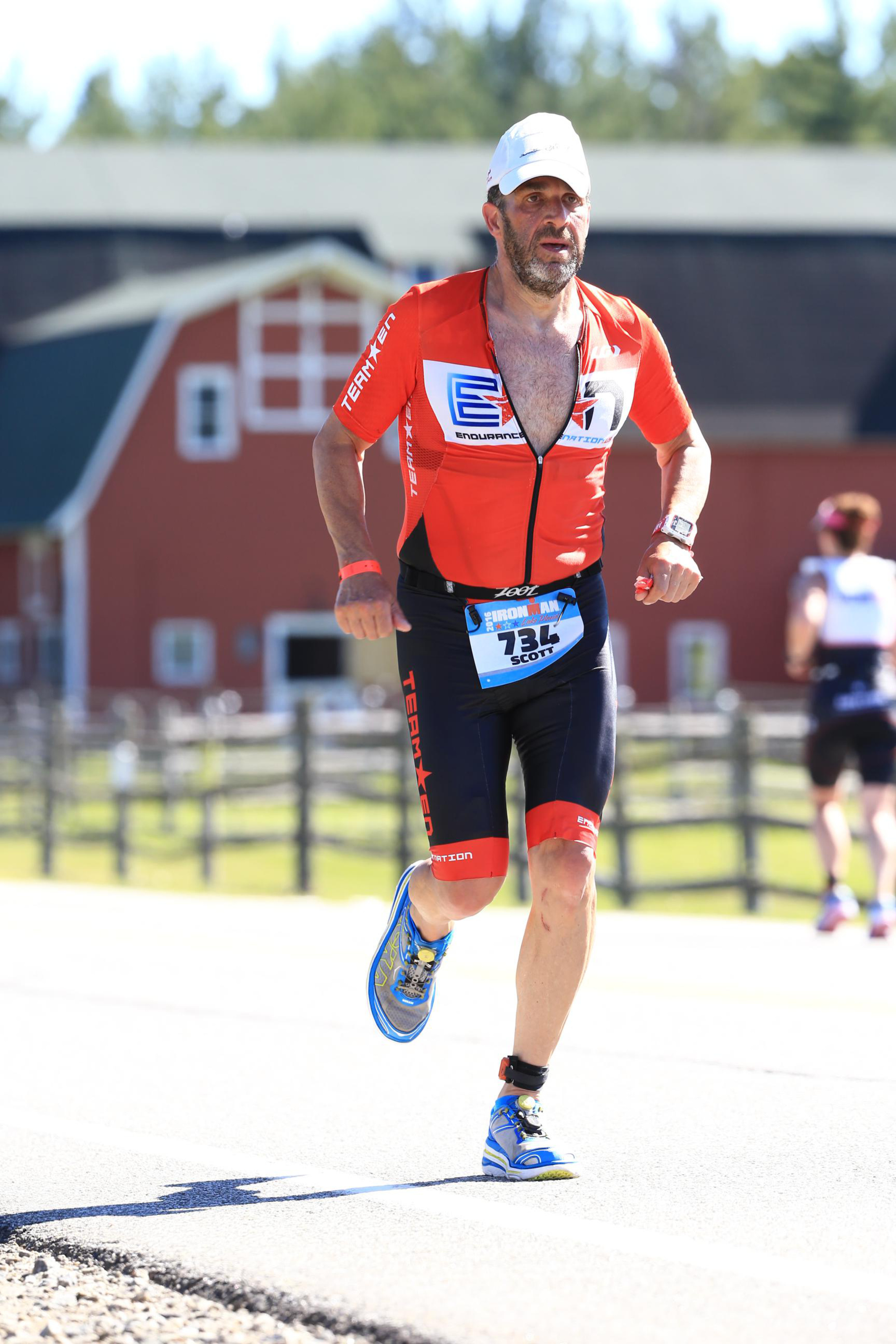 Speaking of which, in the photo ^above^ you can see how on Lap Two, Scott has moved the race saver up under his hat.

Once it’s full of ice, you can put the RaceSaver™ wherever you need cooling most.

Some might want to look fast…Scott prefers just to BE FASTER.

But under the hat isn’t the only place that your RaceSaver™ can help. 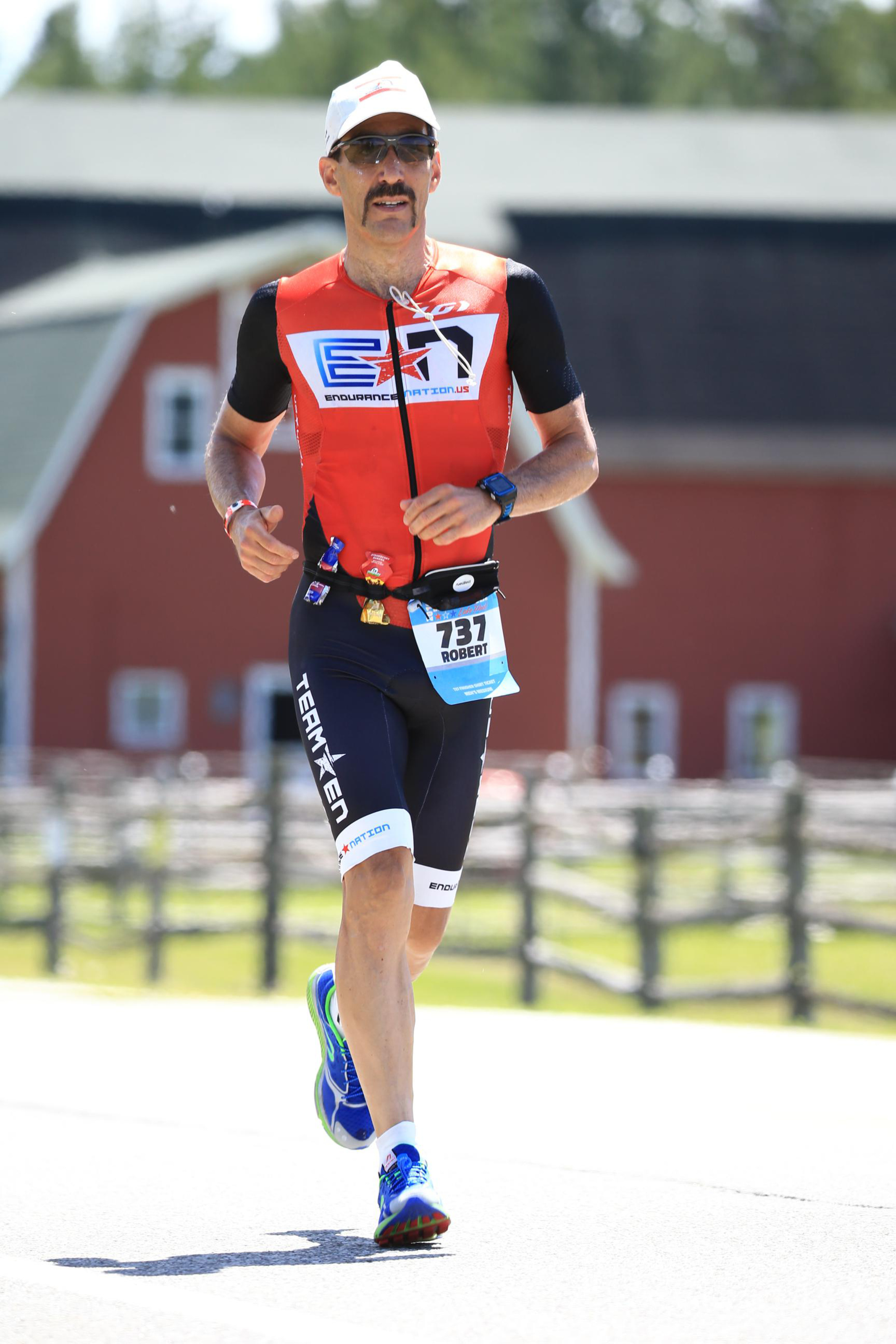 Here RaceSaver™ athlete Rob Sabo has chosen inside the front of his trisuit as the most important spot — right over his heart. You can see the tell-tale leash hanging out the front of his kit.

What you might not know is that Rob was on his way to 5th place in his Age Group!

The leash system allows you to place the RaceSaver™ where you need it most, and easily retrieve it at the next stop.

Having Ice When the Competition Doesn’t is a Secret Weapon

Don’t be left behind at your next race, juggling too many cups at the aid station and wasting valuable ice by throwing it down your shorts or missing your hat. 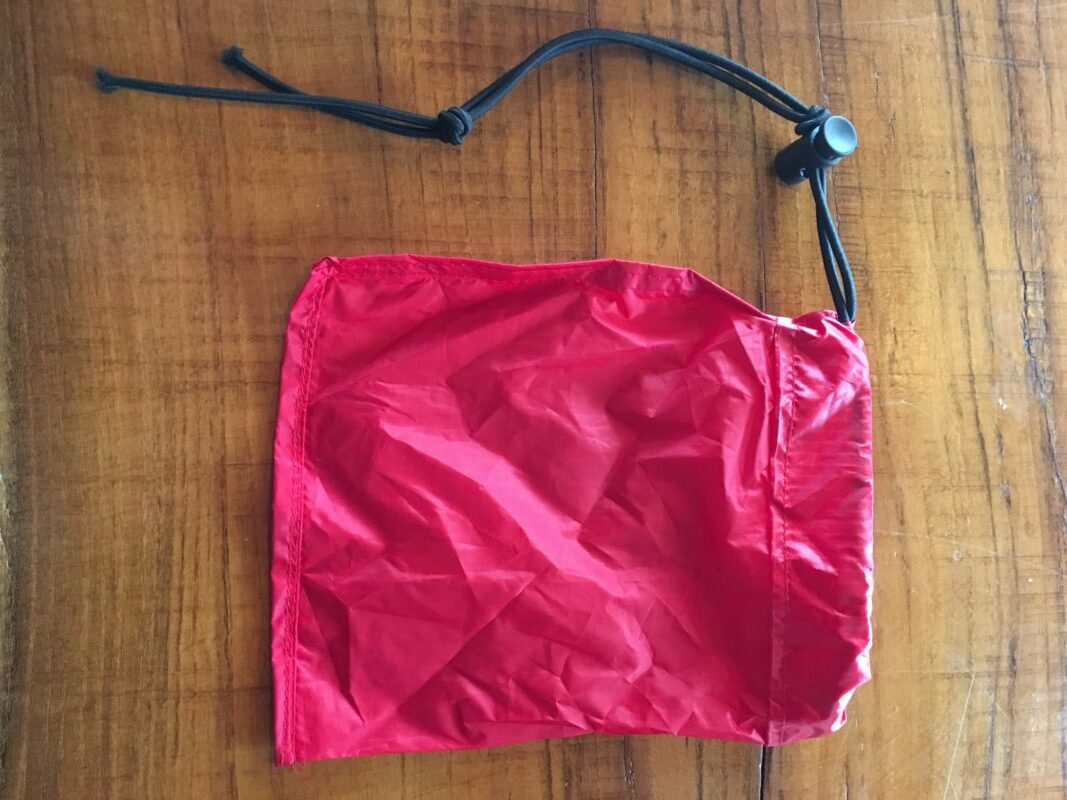 Origins of the RaceSaver Bag

We get a lot of questions about where the RaceSaver Bag came from. It’s an interesting story of both teamwork and experience. It shows just how what you can accomplish when you are open about your challenges and have people who support you solving.

Let’s go back five years to 2011. This is one of the first times that I was going to be missing the world championships due to an injury. This gave me an opportunity to reflect on my skillset — comparing myself as an athlete in general vs when I was on the Big Island for competition. It’s clear to me that there was something holding me back. Something was not allowing me to be as fast on the island as I was elsewhere. I was really struggling to figure it out.

My first realization came when I had a conversation with Jesse from Core Diet (www.thecorediet.com) Jesse is a phenomenal endurance coach and brings an engineer’s mindset to solving endurance athlete issues. He was frank with me: my biggest limiter on the Big Island, and in fact for future performance, was my body composition. I am 6 feet 2 inches tall and 190 pounds on an average day. I would race Ironman at about 185. And while that would get me top-five of my age group and and a ticket to the Big Island, it was not going to allow me to be my best.

So the first step in the process was addressing my nutrition and getting myself into a position where I could race well. Using Jesse’s guidance and the support of my team (Endurance Nation) I was able to lose some solid weight. My next race was Ironman Texas 2012 as part of a comeback. I showed up under 180 pounds and actually fit. I walked away from that race with First Place in the M 35 to 39 Age Group in a new personal best of 9:27. A 20+ minute personal best!

But I knew that wasn’t going to be enough. Showing up on the Big Island light and fit was an excellent starting point. But it wouldn’t make me competitive in the conditions that I had experienced.

Heading back to the drawing board I began to do some serious research on how other oversized competitors were able to be successful on the Big Island. There were many different stories and plans. Some had succeeded, many had failed. But it was worth checking out into my own research.

It became clear across all of these sources of information that being able to keep my skin covered in cold would be the most important thing I could do is a big guy. I became obsessed with arm coolers and special running hats and making the most out of every aid station.

The result was a solid performance, my fastest yet, but still not fast enough for me. I was still spending far too much time at every station. In fact, the hotter it got as the run unfolded, the longer I spent at each aid station. I didn’t technically slow down on the run from an exercise physiology standpoint… I just took longer and longer at each aid station.

Back to the drawing board!

Talking with my teammates at Endurance Nation about solving this issue there were some fantastic ideas around how to make hot runs better. We came up with the pace calculator for managing hot heat conditions. We different ideas for fabric for uniforms. But the most important idea came in the form of a Ziploc bag.

The bag is designed to facilitate a faster T2 by allowing you to carry everything you don’t need to put on in transition with you to put on as you’re moving down the road. Also known as the “Go Bag” as explained by Endurance Nation member Al Truscott, he recommended that you continue to use this bag over the course of the race for your ice.

Always a student of the sport, I brought this idea with me to my racing in 2014 and was blown away by the power of carrying my own ice from each aid station.

Since then I have raced with a Ziploc bag of different sizes in every Ironman® I’ve done. Whether it’s been here on the mainland or on the Big Island, I have found that carrying my own ice is a powerful psychological and performance advantage.

The idea for the RaceSaver Bag came after Kona 2015 when I had a fantastic race but had managed to annihilate my bag. I began to realize the limitations of a plastic bag on the course.

The plastic is slippery. The edges were pointy and cut my skin. It was easy to break the seal as well as the sides of the bag.

Every challenge that I overcame a race day became part of what I wanted to solve when I made the RaceSaver Bag. Fast-forward to November 2015, when I got my hands on a Hello Kitty™ sewing machine and began making the first prototypes.

Now less than six months later we have the first version of the bag life and while being tested by athletes the feedback has been incredible I hope you get your hands on one to test it let us know how we can make it better.